Posted on February 2, 2021July 15, 2021Posted in Linear Algebra, Physics By Team Skillocity
PDF file of this document available for download!

Vectors, what really are they? To answer this question, there are three main ways of looking at it. One is the physics perspective; one is the Computer Science perspective and one is the Mathematical perspective. As always, we’re going to explore this topic both on an intuitive and mathematical level. Let’s tackle the Physics perspective in this article which is arguably the most trivial and easy to understand. More complex vector equations and operations will however not be included in this article (although I personally love linear algebra and higher applications of vector fields and tensor mechanics).

There are numerous kinds of vectors which we’ll encounter. A vector of unit magnitude is called a unit vector and the notation for it in the direction of A is “A cap” or “A caret”. Thus, A vector=|A|(A cap).Unit vectors along the x, y and z axes are called basis vectors for the standard three-dimensional coordinate system are represented as i cap, j cap and k cap respectively.

Vectors having the same initial points are called concurrent or co-initial vectors. Vectors that lie in the same plane are known as co-planar vectors.Vectors are said to be orthogonal if the angle between them is 90°. Hence, the unit vectors i cap, j cap and k cap are also called orthogonal unit vectors.

Scalars like distance, speed, density, energy etc can be added, subtracted, multiplied or divided using basic mathematical rules. However, when we come to vectors the things get slightly more interesting. The product of a vector A and a scalar n is nA whose magnitude is n times the magnitude of A and is in the same direction of A if n is positive and is in the opposite direction if n is negative. Further, if m and n are two scalars, (m+n)A= mA+nA and m(nA)=n(mA)=(mn)A. The division of a vector A by a non-zero scalar n is nothing but the multiplication of A by 1/n. Addition and subtraction of vectors is where things start to get slightly more mathematical. But still, as I promised its very trivial stuff.

There are a few ways to compute the addition or subtraction of vectors, the most common one is the parallelogram law of vector addition. Let R be the resultant of two vectors A and B. According to this law, the resultant R is the diagonal of the parallelogram of which A and B are the adjacent sides. Magnitude of R is given by, R=(A2+B2+2ABcosφ)1/2. Here φ is the angle between A and B. The angle of R can be found out by angle α or β of R with A or B. Tanα=Bsinφ/A+Bcosφ and tanβ=Asinφ/B+Acosφ. It can be mathematically proven using range of trigonometric functions that R is maximum when φ=0° and minimum when φ=180°. Rmax=A+B and Rmin=A-B.

Another way of computing this is the triangle law of vector addition. According to this law, if tail of one vector is placed at the head of the other, their sum or resultant R is drawn from the tail end of the first to the head end of the other. Therefore, R=A+B=B+A. 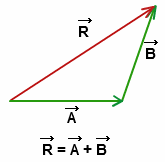 Subtraction of vectors is nothing but reversing the direction of one vector and then adding it. Hence, A-B=A+(-B). In this case, the angle between the two vectors is 180-φ and hence the resultant A-B=(A2+B2-2ABcosφ)1/2. For the direction of this resultant vector, we can find tanα=Bsinφ/A-Bcosφ and tanβ=Asinφ/B-Acosφ.

To classify as a vector, a physical quantity must not only have direction and magnitude, but it should also follow the triangle/parallelogram law of vector addition. For example, current has magnitude and direction, but it is still classified as a scalar as it doesn’t follow the triangle/parallelogram law of vector addition and is just added up like any other scalar. This concept can be generalised in the polygon law of vector addition which states that if a vector polygon be drawn placing the tail end of each succeeding vector at the head or the arrow end of the preceding one, their resultant R is drawn from the tail end of the first to the head or arrow end of the last. Thus, here R=A+B+C+D.

Two or more vectors which when compounded in accordance with the parallelogram law of vector R are said to be the components of vector R. Components of a vector can be made in any mutually perpendicular directions. But in general, we mostly use the standard coordinate system. Thus, the vector R can also be written as R = Rx(i cap)+ Ry(j cap)+ Rz(k cap). Here, Rx, Ry, Rzare components of R along the x, y and z axes respectively. The magnitude of R can be given as R=(Rx2+Ry2+Rz2)1/2.

The vector R makes an angle α with the x axis, β with the y axis and γ with the z axis. Here, cosα=Rx/R, cosβ=Ry/R and cosγ=Rz/R. Cosα, cosβ and cosγ are also called direction cosines of R with the x, y and z axes respectively. An important identity to be noted here is that cos2α+cos2β+cos2γ=1.

Coming onto the cross product, it is denoted by AxB and is read as A cross B. It is defined as a third vector C which is perpendicular to both A and B and whose magnitude is equal to the product of the magnitudes of the vectors A and B and the sine of their included angle φ. Thus, C=AxB=|A||B|sinφ(n cap). Here (n cap) is the unit vector in the direction of vector C.

There are many applications of the cross products in physics itself such as: τ=rxF, L=rxP, FB=q(vxB) and many more. Another interesting result is that two vectors can be proved as parallel or anti parallel to one another if both the vectors bear a constant ratio. For instance, vector A=a1(i cap)+b1(j cap)+c1(k cap) is parallel to vector B= a2(i cap)+b2(j cap)+c2(k cap) if a1/a2 = b1/b2 = c1/c2= constant value. If this constant value is positive, the vectors A and B are parallel and if the constant is negative, the vectors A and B are anti parallel.

Tensors are used in many fields of physics such as stress, elasticity, fluid mechanics, moment of inertia, electromagnetism, magnetic susceptibility, premittivity, general relativity and many more.  In physics, a tensor can occur at multiple points of an object and the tensors may vary from one location to another. This paved the way for the concept of a tensor field. A tensor field assigns a tensor to each point in space. Several times tensor fields are just simply called tensors. Tensor fields are used in many fields of physics and maths such as Differential geometry, general relativity, algebraic geometry and many more.

Moment of inertia has two forms, a scalar form (when the axis of rotation is known) and a more general tensor form which does not require the axis of rotation. Stress is neither a scalar nor a vector, it is a tensor. Area can behave either as a scalar or a vector depending upon the circumstances. Vectors associated with linear or directional effect are called polar vectors and those associated with rotation about an axis are called axial vectors. For example; force, linear velocity, linear acceleration etc are polar vectors whereas angular velocity, angular acceleration etc are axial vectors. Another couple of interesting proofs can be derived. The area of a triangle can be computed as |AxB|/2, similarly the area of a parallelogram would be |AxB|.

Vectors are frequently used in physics, maths and engineering fields but there are also quite a few day to day applications of vectors. For example in sports when a player throws a ball or hits it, vectors are inevitably involved in that situation. In such a case, we can determine the range, maximum height and time period of flight of the ball. Even while crossing a river, a boat often drifts due to the flow of water. Here too vectors are involved.

Vectors are used in many sports and also in much cooler applications such as the determination of force required to move a body resting on a surface with friction. Vectors also have many applications in the fields of thermodynamics and electromagnetism. There are many such more uses of vectors in our everyday life and we have been knowingly or unknowingly using vectors all the time! That was the Physicists perspective and I’ll soon be back with the more generalised mathematical form of it.